Marek Chlanda: You could say that I have actually never had a studio, and that if I did try, the attempts were fiascos. I work wherever I happen to be, recently I am in one place, in Kraków, and these are always temporary places that I adapt to work in. I use them for a short time: from two to a maximum of five years, and I usually opt for a specific character of my work and not any other with respect to the location. I try not to go into these places with myself, with my biography and burden of experience, and I try to de-condition myself, to give up what I know for the sake of what can happen to me in a given space. Quite likely it’s easier for my friends to use the term “studio”. I sometimes speak of “kingdom” and sometimes “an outpatient clinic” for this is a former outpatient clinic. When I call this space a kingdom, I think about myself as a temporary three-year-term usurper monarch; and when I refer to it as to an outpatient clinic, I consider art the quackery that cures you or not.

Filip Skóra: One floor above, at Piotr Lutyński’s, I heard that a studio is not a place but people you share space with. What is your take on that?

M. CH.: The nature of my work defines me a loner and not a gregarious person. Moreover, I treat the studio a bit like a laboratory, and my activity reminds of basic research (applied research already leads to specific goals). I come here every day at the break of dawn and leave when I am tired. My plan for the day contains no specific points, it’s based on focus and fulfilment of everyday obligations, which calls for cooperation with people but not necessarily in social circumstances. Ignacy and Piotr believe that a studio is a place of meetings, and I do meet living people but also a whole throng of ghosts, and this is not really a metaphor.

When I’m visited here by my younger grandson I invite him to cooperate, the task being for example the making of that shelf for an artificial banana, or something else. What I personally find most important is the energy, which is an effort – all eyes are open, as pointless cooperation is not enough.

F.S.: Preparing for this interview I realised you’ve had many studios. How does Marek Chlanda cope with the moments of transition? Does this influence the output? Do you consciously look for new studios?

M. CH.: No, it happens by itself. It both has and has no influence simultaneously. According to the terminology used by American critics, artists can be divided into those with and without a signature. I long ago realised I belong to the latter category. I opt for chance. New places emerge, they influence the practice but there is also something that drags behind me. How do I cope with change? There is no rule. Some time ago a friend from Bergen, where I shared a studio with her and others, called and asked me – after 30 years – what should she do with my studio. Do what you want, I told her.

That connection to my objects, to my works has never been strong. Yet as all I do is create, and I live off that, I sell these things. So yes, they can also be works of art, so they are scattered in different places and I don’t return to them. I assume that if they are worth anything they will float out one day. I try to forget. I prefer to behave like someone suffering from amnesia. I can play-act an interest in myself, but this is always in response to a need: what happens to my things is not my problem. Many of those things have never come into circulation so I assume with acceptance that they may yield to destruction.

F.S.: This is the first time I’ve encountered such an attitude

M. CH.: This attitude is connected to a context. An artistic life is quite the comedy and there is usually not enough time to break through these layers. Why does everyone complain about opening nights and yet attend them? I avoid it. I’d rather meet here, in conditions that make conversation possible. Obviously now I can afford it, but in the past I couldn’t.

As you’re asking, I’ll give you an honest answer: I have a mixed attitude to my work. If you work and conduct studies in a quasi-laboratory like this, objects develop like data in research. It may turn out that they are all good for nothing, that the experiment has failed. However, I generally have a feeling that, taking into account the conditions of development, there is more than one of me. There are at least several figures united by this skin, which sometimes means that there is an understanding between us, and at other times – full antagonism. If I were to deliver an ejaculatory prayer of love to my works I would shrink inside, it would be gibberish. I’m not saying that I spurn them either. I can behave in the worst possible manner towards my works, like a megalomaniac. I don’t believe in a uniform figure. 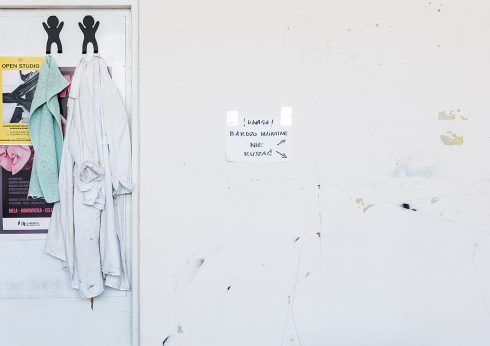 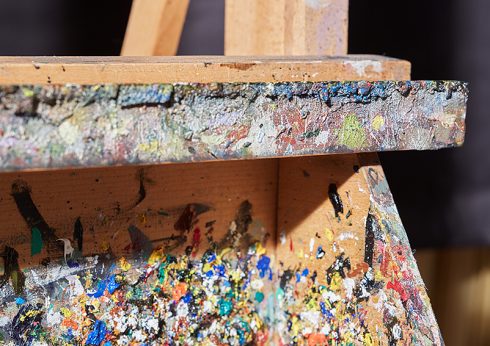